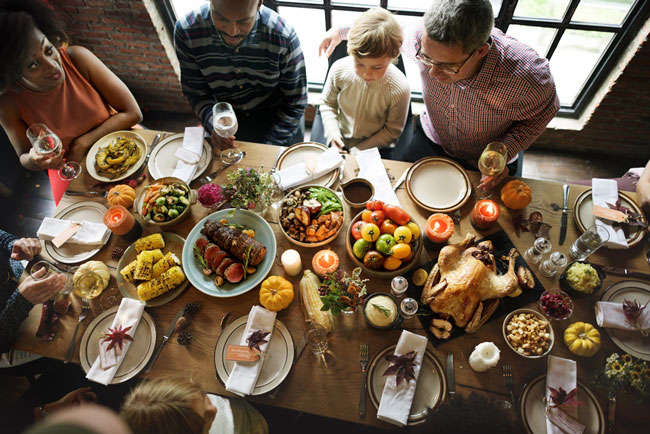 Did you know that the average Thanksgiving meal contains more than 3,000 calories and 150 grams of fat? But no worries — you can still enjoy the flavors of Thanksgiving with trimmed down versions of your favorites!

Whether you’re on a weight-loss journey or you never really pay attention to the calories in your food, it’s still worth taking a look at what exactly we’re eating on Thanksgiving Day.

While nutrition information will vary from plate to plate, think about some of the common foods eaten on the holiday. Your dinner plate might be filled with turkey, mashed potatoes and gravy, stuffing (or dressing), sweet potatoes covered in marshmallow, green bean casserole, cranberry sauce, rolls with butter — and, of course, plenty of pie.

Those aren’t exactly “healthy” foods, now are they? But in most cases, the base food in the recipe isn’t too bad for you. In fact, that food is often an antioxidant-packed addition to your diet.

So how can you get the goodies out of your Thanksgiving meal while losing some of the calories and fat? A few eating hacks can make a world of difference.

We promise: It is possible to make your Thanksgiving favorites a wee bit healthier! One key way you can make foods healthier is by making small substitutions in the recipes.

If you’re making Grandma’s stuffing recipe from scratch, for example, use whole-wheat bread crumbs instead of white bread. This simple substitution won’t affect the flavor, but will pack the stuffing with more fiber, which can help you feel fuller faster.

Trim down those mashed potatoes by either substituting cauliflower for potatoes, blending the two — or, if that seems too extreme, lighten up what you’re mixing in. Instead of using whole milk, use skim milk, and cut down on the amount of butter you’re adding to the mix.

If you’re making sweet potatoes, use fresh sweet potatoes rather than canned. This will help reduce the amount of sodium in the dish.

While those marshmallows on top may taste delicious, your taste buds might be just as delighted with a sprinkle of cinnamon. Try cutting the number of marshmallows you use by half and adding in some cinnamon on top. You could even cut down on the prep time by making baked sweet potatoes instead of a casserole, then letting guests dress their own.

Lighten up homemade gravy by not including pan drippings. Make up for the lost flavor by blending onion, garlic and celery with turkey or chicken stock, a small amount of butter, and flour.

And the answer to the question you’re wondering is…yes, you can still have green bean casserole! After all, green beans are loaded with fiber and vitamin C.

But the usual green bean casserole contains sodium-packed canned soup and fatty French-fried onions. Instead, give this recipe a try:

Melt 1 Tablespoon of butter in a pan on medium heat, then drop in sliced onions, salting them lightly. Cook until onions are browned.

Place mushrooms, chopped onion, garlic and 1 teaspoon of salt in a large pan, then cook for 10 minutes over medium heat.

In a separate pan, bring milk and stock to a simmer, then add flour. Cook, stirring constantly, for about two minutes, then add this mixture to mushrooms. Bring the pan to a boil, stirring until thick.

Put green beans in a baking dish, add mushroom mixture, then top with caramelized onions. Cook for 15 minutes, then serve!

Other tips for healthy eating

Beyond making substitutions in the cooking process, you can also take steps to make your plate a healthier one.

Think of your plate in quarters — fill two-quarters of the plate with non-starchy vegetables, like Brussel sprouts, carrots, green beans or salad.

One-quarter of your plate should contain your protein. Do your health a favor by choosing white, skinless turkey over dark meat turkey with skin. This trims both the calorie and fat count, even though you’re getting the same amount of food.

The last quarter of the plate should contain carbohydrates, including starchy veggies (like potatoes and corn), a roll or stuffing.

When it’s time for dessert, think “topless.” There are often multiple pies available, but pumpkin pie is your best bet, nutrition-wise, because it doesn’t have a top crust.

And finally, we won’t blame you if you still fill your plate with delicious goodies. But if you’re looking for a healthier take, hopefully these tips will do the trick!

December’s only days away. Have you had your checkup for 2018? Schedule your appointment today. Need a doctor? Find one here.