A look inside: Making sense of arthroscopy 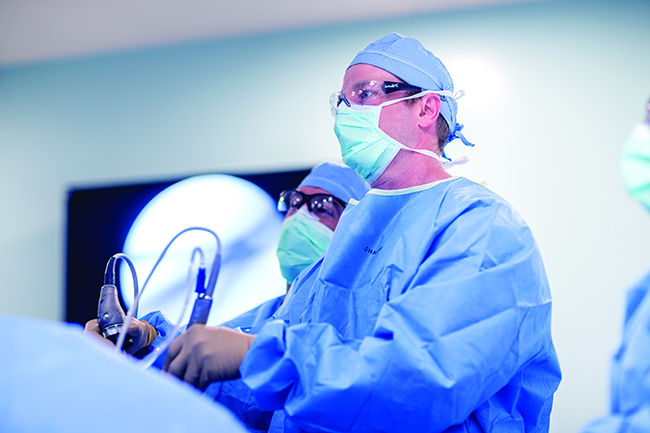 You talked with your doctor about the hip pain you’ve been experiencing, and he recommended an arthroscopy. But what is that exactly?

You may have seen the phrase before. One of the most common contexts comes in relation to sports — you may have read a newspaper article talking about how an athlete underwent an arthroscopic procedure.

But that still doesn’t shine any light on what such a procedure actually entails. That’s where we come in! Read on for a look at arthroscopy and its benefits.

Let’s first break down the word “arthroscopy.” Doing so will help us define what it means.

Arthroscopy comes from two Greek words blended together — the words “arthro” and “skopein.” The former means “joint,” while latter means “to look.” So, taken together, the word means “to look within the joint.”

But arthroscopy has multiple purposes and defining it only as “to look” doesn’t quite hit the mark. There are three basic purposes, and they’re often done simultaneously by doctors during a single procedure.

We’ll take a look into each of those purposes a little later, but first, let’s look at what’s involved in an arthroscopic procedure.

What an arthroscopy entails

We’ve already established that an arthroscopy “looks at the joint.” But how does it do that?

“An arthroscopy is a procedure where we use a camera to evaluate joint injuries,” says Brandon Cincere, MD, board-certified orthopedic surgeon and clinical assistant professor for UT College of Medicine, who specializes in hip arthroscopy. “These procedures are minimally invasive because we’re using small incisions, instruments and cameras to get a closer look at an injury.”

A small incision is made in the patient’s skin. Then the orthopedic surgeon inserts tiny instruments containing a lens and lighting system through the incision. These tools magnify and illuminate the inside of the joint, then the camera transmits those images in real-time so that the surgeon is able to literally see inside the joint.

“There are many benefits to arthroscopy,” Dr. Cincere says. “It’s minimally invasive and less traumatic on the joints — and it allows a surgeon to evaluate the joints thoroughly.”

Now that we’ve defined arthroscopy and how it works, let’s look at its three essential purposes.

The first purpose of arthroscopy is its most basic — it allows a surgeon to accurately visualize and look at the interior of a joint.

You’ve reported your symptoms to your doctor, and he or she has done a basic physical evaluation. The next step after that may have been X-rays and even an MRI or CT scan.

But to really see an injury in your knees, wrists or other joints, arthroscopy provides a surgeon with a tool that’s pretty much unparalleled.

The second purpose of arthroscopy is diagnosis. Once a surgeon is able to visualize the injured joint, he or she can determine the source of the injury.

Because arthroscopy illuminates and magnifies the interior of the joint, including the cartilage and ligaments, it can help clearly illustrate the underlying injury and its severity. This information allows the doctor to determine the best method of treatment.

Arthroscopy allows a doctor to diagnose both acute and chronic injuries, meaning those that have occurred over time.

Increasingly, arthroscopy is being used as a treatment method in and of itself. While inside the joint, surgeons can make repairs that often alleviate the issue.

“In the past, arthroscopy used to be more of a diagnostic tool, but now we generally have an idea of what needs to be done, repair-wise,” Dr. Cincere says. “Through arthroscopy, we can repair cartilage defects and meniscal tears, as well as stabilize the joints.”

Arthroscopy can be used to treat many different conditions and areas of the body, including the shoulders, hips, knees and ankles. Some common injuries or conditions treated include:

Arthroscopic procedures can also be used to scope out and remove loose bodies of bone and cartilage, which may be found in the hip, knee, shoulder, elbow, or ankle.

“Arthroscopy is not for everybody — it can’t be used to treat arthritis, for one,” Dr. Cincere says. “But it’s a valuable procedure that allows fellowship-trained sports medicine professionals to scope out injuries and often treat them, all on a minimally invasive basis.”

If you’re in need of arthroscopy or another type of orthopedic procedure, the Erlanger Orthopaedic Institute offers nationally recognized excellence. Find out more about what we offer.