So, you have dense breasts. What does that mean? 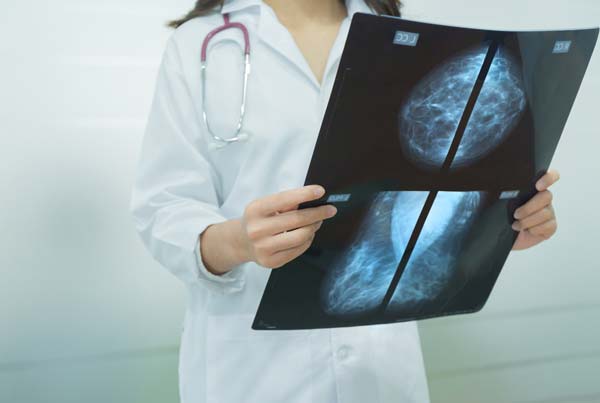 If you’ve had a mammogram in the last few years, you may have gotten a letter telling you that you have dense breasts. But what exactly does that mean?

In January 2014, a Tennessee law went into effect requiring that women whose mammograms show “heterogeneously or extremely” dense breasts be notified. That notification tells you some basic information about breast density — essentially that dense breasts can make it more difficult to evaluate mammograms and may be tied to an increased risk of breast cancer.

But let’s take a deeper dive into what having dense breasts means for you.

Breast density is a measurement used to describe the breakdown of different types of tissue in a woman’s breasts. Breasts are comprised of fat and breast tissue, which contains milk ducts and lobules, held together by connective tissue.

Those differences in density are evident on a mammogram. If you’ve received a notice that you have dense breasts, it means that your breasts are primarily made up of breast and connective tissue rather than fat.

It’s more difficult for a radiologist to read a mammogram of dense breasts.

Some women believe that if they have firm breasts, their breasts are dense. But that’s not accurate.

The only way to determine whether you have dense breasts is to undergo a mammogram that looks at the components in the breast.

What factors contribute to dense breasts?

Dense breasts are common. In fact, according to the National Cancer Institute, between 40 and 50 percent of women ages 40 to 74 have high breast density.

High breast density, though, is more common in younger and thinner women. As we age, our breasts lose density and become fattier.

There is an exception to that rule, though. Women who take hormone replacement therapy during menopause may have denser breasts than those who do not.

Breast density can be inherited — so if your mother has dense breasts or had them when she was younger, you likely will have them, too.

The connection between dense breasts and breast cancer

Women who have dense breasts are at a slightly higher risk of developing breast cancer than women whose breasts are fattier. The reasons for that are unclear.

However, dense breasts also make it more difficult for radiologists to see cancerous areas in the breast. That’s because dense breast tissue shows up as white on a mammogram. Breast tumors also show up as white, so dense tissue can mask some tumors.

What can I do if I have dense breasts?

If your mammogram shows that you have dense breasts, your doctor will use that information to help plan a screening routine that works best for you.

Depending on your individual needs, including your family history and personal medical history, your doctor may also recommend breast ultrasound or breast MRI in addition to mammograms.

While you can’t lower your breast density, you can take other steps to safeguard your breast health.

Living a healthy lifestyle can help. Eat a balanced diet, get regular exercise, don’t smoke, limit your alcohol consumption, and try to minimize stress. Regular checkups with your doctor and age-appropriate screenings are also important.

Have you celebrated your mammoversary this year? Call 778-MAMO (6266) to schedule a mammogram at the Erlanger imaging location that’s closest to you.