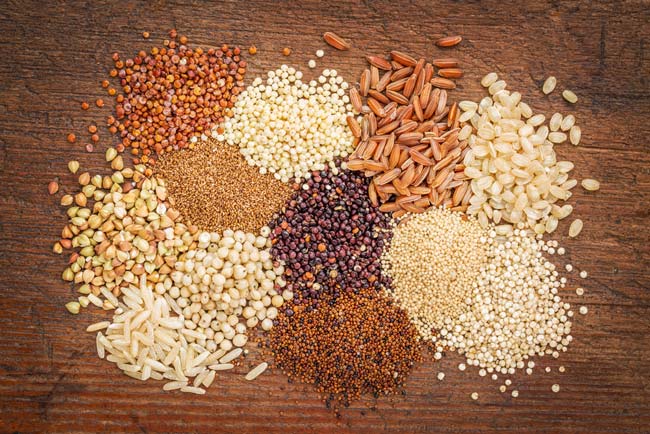 Dietary guidelines call for us to eat whole grains. But when you think of whole grains, do you struggle to come up with anything but wheat? There are many other options to explore!

Whole grains play a key role in promoting good health. They provide the body with a number of nutrients, including protein, iron, magnesium and B vitamins. Most importantly, they contain high amounts of fiber, which is essential for digestion and can help you feel fuller longer.

But eating the same old whole wheat products over and over again can get tiresome fast. Fortunately, there are a number of lesser-known whole grains that you can incorporate in your balanced diet to add variety and nutrients.

First, though, let’s talk through a few whole grains that you already know about — but that you may not think about as whole grains. Oats, corn, quinoa, rice and wild rice are all whole grains that can be easily found in the grocery store and incorporated in your meals.

But beyond those, there are a few nutritional powerhouse whole grains you should know about. Let’s take a look at five such grains.

Amaranth is what’s called a “pseudo-grain,” meaning it’s not actually a cereal grain but that it carries the same nutritional profile as cereal grains.

The peppery-tasting amaranth was a staple of the diet in the ancient Aztec culture. It contains a good bit of protein, making it both a healthy carbohydrate source and a lean protein. Beyond being a source of protein, amaranth has also been shown to help reduce cholesterol, since it contains phytosterols.

Amaranth, which is gluten-free, can be found in cereals, bread products and crackers — and in South America, it’s common to pop it, like corn.

Barley has been cultivated for centuries, and you actually have probably eaten it before. After all, it’s used in beer.

But it also has an important role in diets around the world. Barley contains the highest amount of fiber of all whole grains, but it’s essential to make sure you’re eating whole grain barley and not pearled or pearl barley.

Barley is often seen as an ingredient in soup, but it can also be served as a side dish or baked into bread or even cookies.

You’ve probably at least seen buckwheat pancakes on a menu, even if you haven’t eaten them. But this grain has many, many other uses.

Contrary to the end of its name, buckwheat is not a type of wheat. It contains high levels of protein and both soluble fiber and resistant starch. In addition, buckwheat also contains an antioxidant called “rutin,” which helps improve circulation and prevents LDL cholesterol from blocking blood vessels.

Buckwheat is used in staple dishes found in cultures across the world — from soba noodles in Japan to crepes in France and savory dishes in Italy.

Millet isn’t a single grain — it’s actually a group of several different grains. This group of grains has a mild flavor that partners well with a variety of foods.

Millet, which is gluten-free, is packed with magnesium, which helps the body maintain normal muscle and nerve function. Millet has also been shown as effective in helping manage both diabetes and inflammation.

This type of grain can be made into a pilaf or used in baked goods or soups. Like amaranth, it can also be popped and eaten as a snack.

Most whole grains contain fiber in their bran, which is the multi-layered skin of the grain. But rye actually contains fiber in both the bran and the endosperm, which is located within the grain itself.

That makes this grain particularly healthy for those with diabetes, because it has a low glycemic index.

Rye can be used in a variety of recipes, including breads, soups and salads. In addition, the rye berries themselves can be warmed and eaten as a side dish.