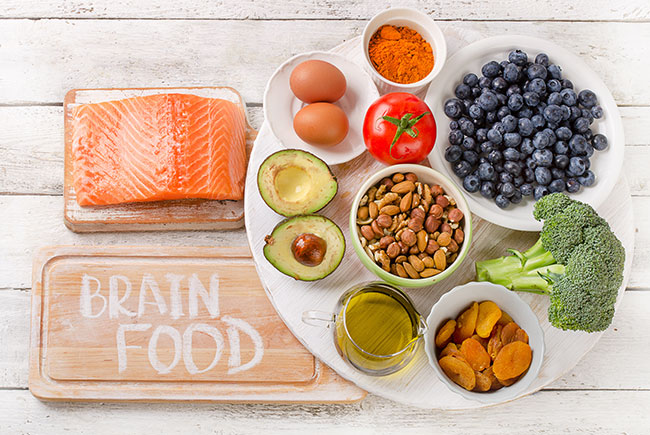 As we age, every part of our body does, too — including our brain. While mental decline is common as we age, there are steps you can take to limit the effects and protect your brain. Including certain foods in your diet can help the cause.

Cognitive impairment and memory loss do not have to be inevitable parts of aging. Living a healthy lifestyle — by regularly exercising, not smoking, maintaining a healthy weight and staying mentally active — isn’t just good for the body. It’s also good for the mind.

A few easy tweaks in what you eat can play a big role in protecting your brain health. Read on for a look at five foods that can help boost your brainpower.

For best results, aim to include at least two servings of fatty fish in your diet each week. Avoid varieties that are high in mercury.

These veggies, which include romaine lettuce, greens, and broccoli, are also high in folic acid and B-vitamins.

It’s also been shown to stimulate the production of endorphins in the brain, which helps improve mood.

Choose chocolate that contains as high a percentage of cocoa as palatable. If you can choose a chocolate bar or chocolate treat that also contains walnuts, even better! Several studies have found that walnuts are associated with improved learning and memory.

Need guidance about your diet or another aspect of your health? Find a physician here.