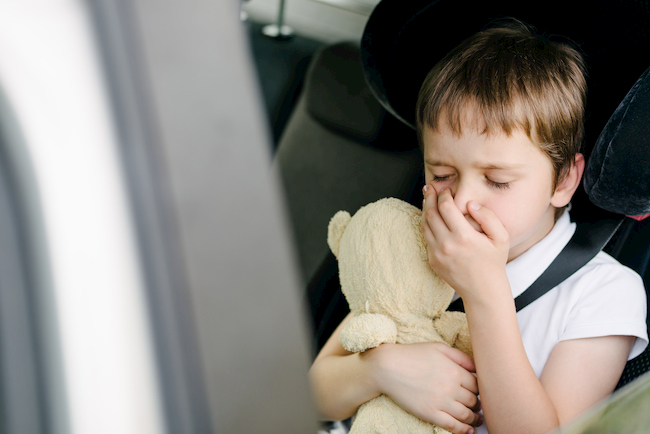 We’ve all been there — riding in a car or on an airplane when, all of a sudden, nausea hits. Motion sickness is all too common, but there are some steps you can take to make your next road trip with the kids a little less painful.

Motion sickness has been occurring for as long as we’ve been in motion. It can strike without warning and is exactly like it sounds, it’s sickness that’s triggered by motion.

While it can occur in people of all ages, it’s particularly common among kids, pregnant women and those who are taking certain kinds of medication. Any mom who’s traveled with a child or two knows this to be true!

Let’s take a deeper dive into motion sickness and what you can do if your little ones are affected.

Motion sickness can seemingly appear out of nowhere, causing anything from a slight queasy feeling to vomiting, dizziness and a cold sweat.

But how does it work exactly?

Well, your brain typically knows that things around you are moving based on signals from the ears, eyes, muscles and joints. If those body parts are sending signals that don’t match up, motion sickness is the result.

That means that if, for example, your child is playing on a tablet while you’re driving down the road, his eyes might not sense motion but his inner ear would. And boom: motion sickness.

Tips to fend off motion sickness

So, now that we’ve established what causes motion sickness, how can you prevent it from happening? While there’s no 100 percent foolproof way of preventing it, there are steps you can take to lessen the risk:

What to do when motion sickness strikes

If, despite your best precautions, your child still gets motion sick, there are a few things you can do to help him or her find relief.

Stop the car and get out and walk for a few minutes in the fresh air. If you’re unable to stop immediately, have your child either close his or her eyes or focus on a spot out in the distance. Help your little one breathe deeply, since shallow breaths often make nausea worse.

Have a little one who’s prone to motion sickness? Your pediatrician may be able to suggest some potential remedies. Find one here.