Back to school — and back to head lice? 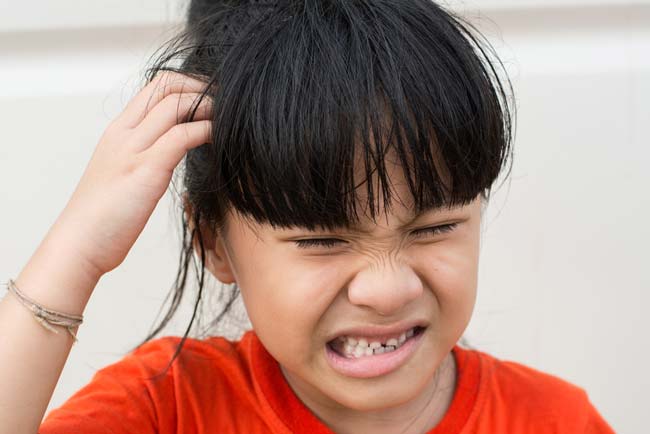 Now that school’s been back in session for a while, does it seem inevitable that soon enough your little one will be bringing home a cold…or head lice? Those pesky little lice may often be a factor in schools, but there are ways to prevent them.

Let’s first talk a little about what exactly they are.

Head lice are a small parasitic insect that usually are found on the head, eyebrows or eyelashes of people. These pests rely on human blood as a diet and live close to the human scalp.

While they’re annoying, these insects aren’t known to spread disease. Instead, they cause itchiness and scalp irritation as they crawl across the head.

In the United States, head lice are most commonly found among children in preschool and elementary school, as well as the families of those children. And they’re really common — the Centers for Disease Control and Prevention estimates that between 6 and 12 million infestations occur each year in children between ages 3 and 11.

They spread easily in schools because children are in close contact with each other and playing together. But that doesn’t mean that getting head lice is inevitable. By training your little ones on a few preventive steps, you can help lower the risk of your child becoming the next head lice victim.

This one seems like common sense. But for little kids, sharing is often something they’re taught to do, not to avoid.

Still, though, it’s important to teach kids that items touching the head are an exception to the sharing rules.

Personal items like hats, scarves, coats, combs, brushes and hair accessories should not be shared under any circumstances. Other items that touch the head also should not be shared — that includes things like headphones and earbuds that come in contact with a person’s scalp.

This one’s another one that young kids can have a difficult time with.

Think about how many times you’ve seen little ones laying on the floor with their heads close together while playing. Or how many times play-fighting leads to one head touching another.

But for the sake of head lice prevention, those type of activities should be avoided. It’s important to avoid coming in contact with someone else’s head.

Gross, we know! That’s why head-to-head contact is a no-no.

At school or in other places, it’s important that the items we described above, along with clothing and coats, be stored away from common areas.

That means keeping items in individual lockers that aren’t shared with others, rather than shared spaces like coat closets.

If you believe your child’s belongings have come in contact with someone who has head lice, they should be disinfected.

Disinfect combs and brushes by soaking them in hot water for five to 10 minutes. The water should be at least 130 degrees. The same goes for clothing or bed linens — put them in the washer in a hot water cycle and then dry them on a high heat drying cycle. If an item can’t be washed, it should be sealed in a plastic bag and stored for at least two weeks.

If your child gets head lice…

Despite our best precautions, sometimes things still happen. If your child comes home with head lice, talk with your doctor about the recommended treatment.

There are multiple options for treating head lice, which may be recommended for both the infested child and other family members on a preventative basis.

Your doctor may recommend either an over-the-counter topical treatment or a prescription, along with the disinfecting processes described above.

Children come in contact with many illnesses and conditions at school. That’s why having a trusted pediatrician is important. Find a doctor here.