Have a teen? Get the facts about Juuling 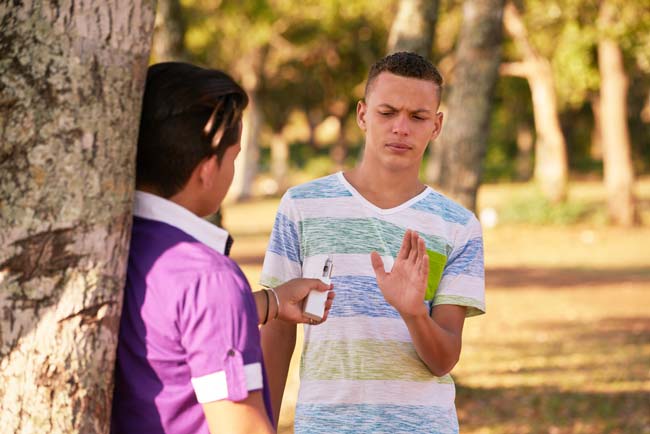 Juuling has been all over the news lately. But what the heck does this buzzword mean? And why does it matter?

You’ve heard of e-cigarettes. In 2014, e-cigarettes were the most common smoking method among middle and high school students. That trend started as a “healthier” alternative to cigarette smoking. But as we know, there is no safe way to consume nicotine.

Well, “Juuling” consists of using a type of e-cigarette called a “Juul” to smoke. So what do you need to know, as a parent, about this new trend?

What Juuling is
The Juul is a type of vape that looks like a flash drive and can be charged using a USB port. This vape accounted for one-third of U.S. e-cigarette use as of late last year.

Legally, this product can only be sold to adults age 18 and older — and it’s mainly targeted to the 18- to 24-year-old market. However, it’s increasingly common among underage smokers, including teens and even younger kids.

The product is marketed as a “smoking alternative,” and its use is referred to as “Juuling.”

Because the device is tiny, looks like a flash drive and can easily fit in the palm of a hand, it can be hidden by students and taken into school. And according to recent reports, students have taken to using the device, sometimes even inside classrooms. Because the device produces even less vapor than other e-cigarettes, it’s discreet enough for kids to think they can get away with it in school.

The problem has cropped up in schools across the United States in recent months, and it seems to be on the increase.

Beyond its appearance, the Juul device is popular because of the way it can be charged and the fact that flavor pods for it come in enticing flavors like mango and cool mint.

The health risks of Juuling
Juul devices and other e-cigarettes are often presented as safer alternatives to cigarette smoking. Many people see little harm from “vaping.”

But the reality is that vaping is dangerous, too.

While e-cigarette devices don’t contain some of the toxic substances found in cigarettes like tar, they do still contain dangerous cancer-causing chemicals. And because they’ve been around for such a limited amount of time, researchers don’t yet know how harmful they can be.

However, researchers do know about the dangerous effects of nicotine. That’s where the primary danger is with Juuling. Nicotine is highly addictive, and even teens that begin using it through e-cigarettes may eventually wind up smoking regular cigarettes.

Each Juul cartridge contains as much nicotine as what’s contained in an entire pack of cigarettes. Many young smokers are unaware that these “pods” contain such a large amount of this highly addictive substance.

Nicotine can be particularly dangerous for kids and teens, since it can disrupt brain development and increase the risk of developing heart disease and other conditions later in life.

Beyond that, some teens also “hack” the Juul device and vape marijuana and other illegal drugs.

What to tell your teen about Juuling
It might be easier to never talk with your teen about smoking and other addictive habits. But the time is now — if you haven’t already.

Talk with your teen about why it’s dangerous to smoke anything, including cigarettes, e-cigarettes and Juuls specifically. Emphasize the impact it could have on his or her health, both now and in the future.

If your child won’t take your word for it, have his or her doctor talk about the dangers at an upcoming appointment.

Want other pointers for talking with your teen? The Surgeon General offers some tips.

Your teen’s doctors can be a valuable ally for you when it comes to Juuling and other issues. Need a doctor for your child? Find one here.