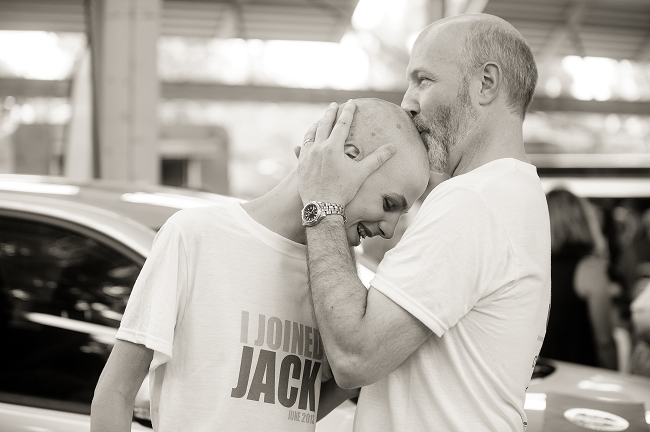 On June 7, at Chattanooga Market, Jack Skowronnek, of Jack’s Chattanoggins, will shave his head for the seventh time at his 5th annual life-changing event, partnered with Children’s Hospital Foundation. Sign up as a “shavee,” raise funds, or donate to support Erlanger’s superior cancer-fighting efforts — or simply come experience what Jack’s mother, Dawn Skowronnek, calls a “very joyful” event.

Dawn explains, “We try not to get too serious, we don’t want to be an ‘In the Arms of the Angels’ situation, but every year I cry. If you can’t donate, come out and watch. You are emotionally affected by what you witness. It is hard to deny.”

Jack’s Chattanoggins — created by Jack when he was only 10 years old — doesn’t only bring awareness to the community, it also provides a platform for patients’ families to show support and is a deeply personal experience for some — with parents participating as shavees to support their own children.

And if you’re a woman shavee, you’re not alone. Dawn says, “Over the years, we’ve had more than 25% shavees who are women.” She explains how women shaving their heads is an almost spiritual experience. “Looking at them, they’re not missing hair. You just see a glowing face. What’s happening inside is a scary, terrifying experience,” referring to the underlying purpose of shavees, “but on the outside, it’s just amazing to see the looks on their faces.”

For the past 6 years, Jack has raised over $130,000. This year’s goal is an ambitious $64,000 — the organization’s biggest shave ever. If Jack’s goal is met, the proceeds will approach $200,000. All money raised goes to the Pediatric Center for Cancer and Blood Disorders in Children’s Hospital at Erlanger. And since 90% of area kids go to Children’s Hospital at Erlanger for cancer treatment, you can make a big impact on childhood cancer in Chattanooga by signing up.

So what’s next for Jack? The 16-year-old sees Jack’s Chattanoggins going national — starting in Knoxville, Nashville, and onward. This ambitious attitude isn’t a surprise to Dawn. Growing up, Dawn says, “[Jack] would watch St. Jude’s Hospital commercials and beg us to send money. He’s empathetic beyond his years. That’s just who he is.” Jack wants people to know they’re capable of incredible things. He says, “You don’t have to be an extraordinary person or an eccentric personality to do something great. I’m just a normal kid, the average teenager. I’ve managed to have this idea and stick with it and do this incredible thing.”

Jack is also a natural when it comes to networking and nurturing relationships with brands, which aids his expansion. Kona Ice recently signed on as a sponsor for the non-profit. Jack says his relationship with the shaved ice shop is “fantastic!” Kona Ice is offering a free Kowabunga Kona (normally a $5 ice) to all shavees on June 7. Shavees also get free refills on their Kona anytime during 2015. While his relationship with Kona might be a perfect pairing, his relationship with the Kona Ice Penguin is another story. He says jokingly, “[It was] rocky at first, but we’re starting to warm up to each other.”

Teen philanthropists: they’re just like the rest of us.

Join Jack’s Chattanoggins June 7, 2015 from 11 AM–4 PM at Chattanooga Market’s First Tennessee Pavilion. Be the next to say, “I joined Jack!” Sign up or donate now.