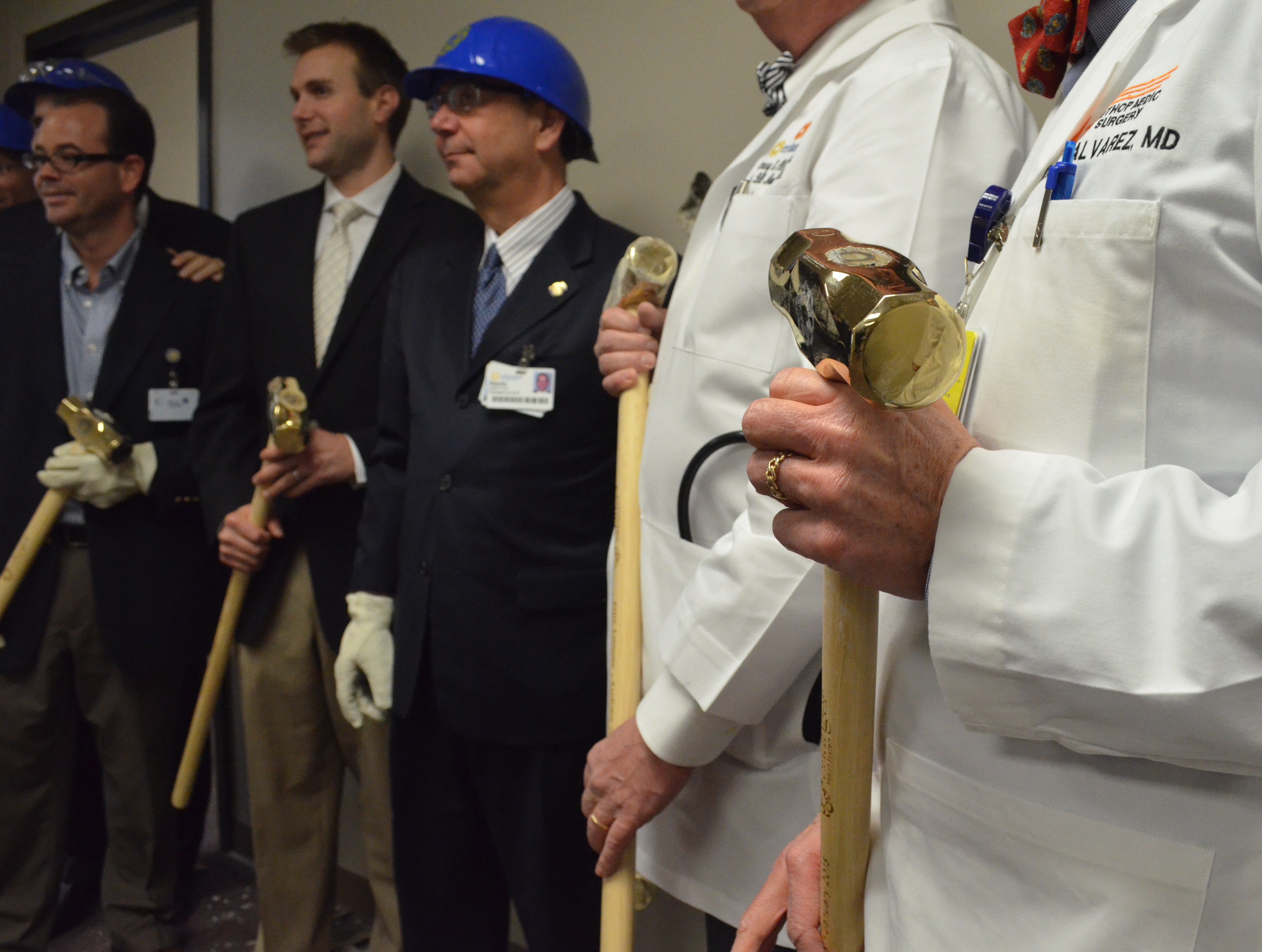 Physicians and executives at Erlanger hospital traded their scalpels and pens for sledgehammers Friday as they tore down a wall in a ceremony to begin construction of the new Center for Orthopedic Surgery.

The new orthopedic area, set to open later this year, will feature four new operating rooms, 12 in-patient beds, pre- and post-operation areas, a family waiting room and rehabilitation and common areas. The $9.5 million project is the first phase of a planned expansion at Erlanger made possible by a $71 million bond investment.

Kevin Spiegel, president and chief executive officer of the hospital, addressed the gathering of executives in dark suits, doctors in white coats and nurses in blue scrubs.

“This is a wonderful occasion,” Spiegel said. “This marks a new phase of Erlanger’s future that will meet the hospital’s infrastructure needs with world-class facilities unparalleled in the region, and will help our patients achieve their goals to return to normal, more active states.”

Dr. Mark G. Freeman, who trained at Erlanger and has been pushing for the project for more than five years, said it has been a long time coming.

“The quality of care at Erlanger has always been the best, but unfortunately the infrastructure has lagged behind,” Freeman said. “It’s a great day for me and my colleagues, but most importantly for Erlanger and its patients in the region.”

Freeman said Erlanger has long been the region’s go-to destination for sports medicine, not only treating athletes from UTC and the area’s high schools, but patients in North Georgia, Alabama, North Carolina and South Carolina as well. He said the project will help the hospital provide the best orthopedic care around, and he borrowed a racing analogy to express its impact.

Four doctors, Spiegel and Erlanger Executive Vice President and Chief Operating Officer Rob Brooks all donned blue hard hats, safety glasses and gloves and wielded gilded sledgehammers made specially for the event. Spiegel took the ceremonial first whack, with others following suit with three or four swings. Freeman, attacking the wall as if it cheated him at cards, took eight. He called it a release.

“I’ve been waiting to do that a long time,” Freeman said, smiling through the air, thick with dust from the bludgeoned wallboard.

(as seen in the Saturday, January 24th, 2015 edition of the Chattanooga Times Free Press)
by Will Healey