What happens after a TIA? 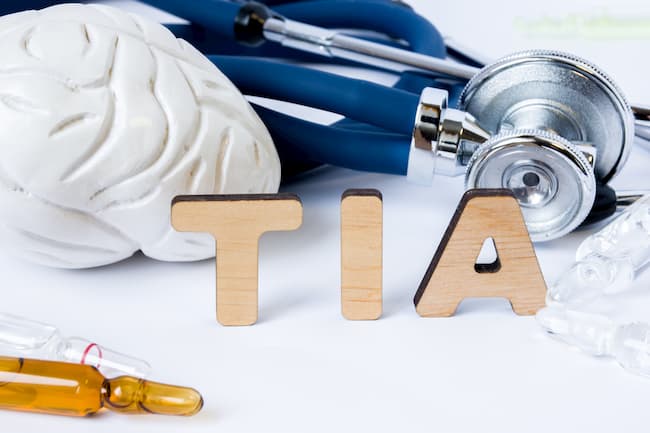 Did you know that many people experience a warning sign of sorts before having a stroke? It’s true— almost 15 percent of all strokes are preceded by a TIA, what’s often called a “mini-stroke.” So, if you or a loved one have a TIA, what happens next?

We often think of stroke as something that occurs completely without warning. But that’s not always the case. Sometimes people experience a smaller version of stroke prior to having a full-on stroke.

Those “mini-strokes” are officially called transient ischemic attacks, or TIAs.

Read on as we take a look at answers to some common questions about TIAs and stroke.

Q: What exactly is a TIA?

A: Well, we’ve already defined that TIA stands for “transient ischemic attack.” You might recognize the word “ischemic” as being related to stroke. In fact, ischemic strokes are one of two types of strokes and by far the most common.

“Ischemic” helps us define what’s occurring — it comes from the word “ischemia,” which means a restriction in blood supply, causing a shortage in oxygen.

So, in short, when you experience an ischemic stroke, you’re dealing with a clot or other blockage that keeps vital oxygen from making its way to your brain.

The same is true for a TIA. When you experience a TIA, there’s a temporary blockage of blood flow to the brain. This type of attack only lasts for minutes and typically causes no permanent damage, but while it’s a minor attack, it’s often a major warning sign.

Q: Would I know I was having a TIA?

A: If you’re observant and know the signs of stroke, you may recognize that you’re having a TIA. Because both transient ischemic attacks and stroke cause a blockage of blood and oxygen to the brain, the symptoms are the same.

If you’re having a TIA, you may experience:

If you experience any of these symptoms or notice them in someone else, it’s important to seek prompt medical attention. You could be having a stroke, and even if you’re only having a TIA at that time, you may still develop a stroke shortly thereafter.

Q: If I have a TIA, will I definitely have a stroke?

A: It’s not absolute, but experiencing a transient ischemic attack is often a precursor to a stroke. TIAs often occur in the hours or days before a stroke, which is why seeking medical attention is so important.

What’s the connection? Well, the underlying cause of the loss of blood flow to the brain and other contributing factors doesn’t just disappear once you’ve had a TIA. While the initial clot may disintegrate, you may still have factors that increase your risk of developing a stroke, including a narrowed blood vessel in the brain or an injury to the blood vessels.

About one-third of people who experience a TIA go on to have a severe stroke within one calendar year.

A: Just like with most medical conditions, anyone can experience a TIA. But certain people are at a higher risk of both TIAs and stroke.

Risk factors for TIA include:

If you’re diagnosed with a TIA, your doctor will take steps to treat and manage any underlying medical issues, including those identified above. You may be placed on medications to lower your blood pressure and cholesterol, as well as told to make lifestyle changes such as smoking cessation or increased exercise.

If you have a transient ischemic attack with no obvious risk factors, your doctor may send you for further neurological testing to rule out rarer underlying causes.

Q: Can you prevent a TIA?

Prevention of TIAs and stroke largely overlaps with prevention of other chronic and serious medical conditions, including heart disease and cancer. A healthy lifestyle is important.

Take these steps to reduce your risk:

Dr. Ruchir Shah is a neurologist at the Southeast Regional Stroke Center.

Believe you may be at a higher risk of stroke or TIA? Talk with your doctor about your risk factors or learn more at Erlanger.org/Stroke.