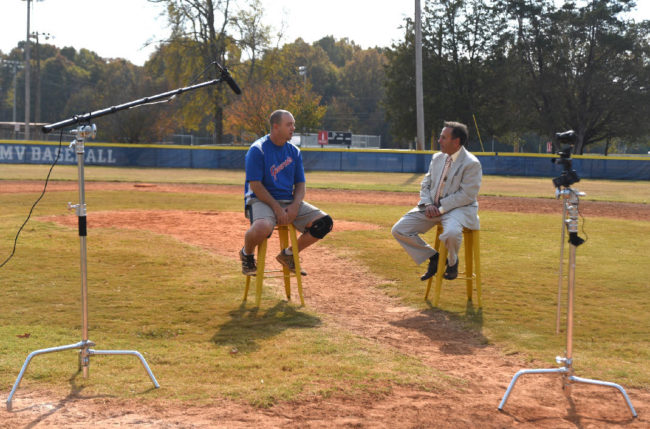 Eric Hixson is the poster boy for Erlanger hospital’s plot to steal your ailing heart away.

On Oct. 20, Hixson, a 40-year-old pipefitter with the Tennessee Valley Authority, had bypass heart surgery at Erlanger.

Normally that would mean his breastbone would be cut apart, his heart stopped, and his body placed on a heart and lung machine for the duration of the surgery.

He would be in the hospital for five or six days and then in rehab or sitting in a chair at home for another three or four weeks.

Instead, on a Monday afternoon, 11 days after his operation, he is on the softball field at Middle Valley Recreation Center in Hixson, playing catch with his kids. Then he joins former WRCB-TV morning anchor Jed Mescon, now vice president for public relations and marketing at Erlanger, to talk about his operation while a videographer records their conversation.

Hixson is ecstatic about how well his surgery went.

“I had the procedure on Thursday, and I was discharged on Friday,” he said in an interview last week. “I sat up Friday morning in the ICU, and everybody around me I could hear them moaning and screaming. I felt bad because I was sitting there in the recliner eating breakfast.”

Hixson was one of the first patients for Dr. Larry Shears, Erlanger’s newly hired and highly touted heart surgeon who uses robotic gear to perform what is called non-invasive surgery. Instead of slicing through a patient’s breastbone, and stopping the heart, Shears makes several small incisions a couple of inches wide, inserts a camera and the robotic arms, and then manipulates them to perform the surgery. With the robotic arm steadying his hand, he can make precise cuts with tiny tools, reducing the area affected by the surgery and dramatically lowering the amount of time a patient needs to recover.

It’s a heart surgery procedure no one else in town is doing, and Erlanger is making certain everyone knows that.

After Shears arrived a few weeks back, the hospital purchased three full pages in the Sunday Times Free Press to tout his skills. “Two surgeons lead the world in performing open heart surgery without opening the chest,” the copy reads. “And now that Dr. Shears has joined Erlanger’s world-class team, the entire region can look forward to a new era in heart care.”

But the promotional push for Shears and Wiisanen is only the beginning.

Later this month, Erlanger will officially announce it has created a Heart and Lung Institute in an attempt to win more of the area’s heart patients away from CHI Memorial, traditionally the local hospital where most heart procedures are performed. Over the next few years, the hospital hopes to build a team of as many as 30 physicians for the institute, with several hundred support staff, to create what Erlanger CEO Kevin Spiegel vows will be a world-class heart center.

“I don’t compete with [CHI] Memorial so much as I want to be mentioned in the same breath as Vanderbilt and Emory,” said Dr. Charles Campbell, chief of cardiology at Erlanger and co-director with Shears of the new Heart and Lung Institute. “I can turn south and go to Emory, but if I can do it just as well closer to home, that is good for the area.”

Construction for the new $10 million center on the fourth floor of Erlanger’s Third Street main hospital began in August, and plans include upgrading equipment and moving the cardiac operating room and catheter laboratory to the same area.

The goal is to create a space where doctors with similar specialties who now have offices scattered around the hospital can share their expertise.

But Erlanger’s push to expand its heart program isn’t winning rave reviews from everyone.

Most heart surgeons in the area are not employed by a hospital, but rather work independently, using a hospital when needed for surgery or to treat a patient. One large group of about 23 surgeons, the Chattanooga Heart Institute, is affiliated with CHI Memorial. Another similar group, the six-surgeon Alliance of Cardiac Thoracic Vascular Surgeons, worked in the past with all three major hospitals — Erlanger, CHI Memorial, and Parkridge.

But in early July, the alliance announced that as of Aug. 1, it would no longer work with Erlanger, apparently as a result of the hospital’s plans to launch the Heart and Lung Institute, all of whose staffers will be hospital employees. As a consequence, Erlanger has brought in surgeons from Vanderbilt University Medical Center on a temporary basis through mid-November to fill in.

While Erlanger CEO Spiegel praised the alliance surgeons in a letter to area cardiologists for “their years of service,” he added a rejoinder: “We believe to take patient care to the next level for Chattanooga and our patients, we need to recruit new and innovative technology and talent.”

Richard Morrison, one of the surgeons with the alliance, declined a request for an interview.

But CHI Memorial’s top cardiologists said that while Erlanger may be bringing in top-rated surgeons, it is losing community ties that they believe are more important.

“Chattanooga is a big small town, but it is still a small town,” said a cardiologist who asked that his name not be used. “Most of the patients I see I’ve taken care of their mom, or their sister sees me, or their cousin told them over Thanksgiving dinner about Memorial. That is how Chattanooga works.”

Dr. William Warren, chief of cardiology at CHI Memorial and chairman of the board for the Chattanooga Heart Institute, said surgeons with the alliance “have been a mainstay in the community, they are excellent surgeons, with great outcomes, who have taken care of thousands of people who needed heart surgery.”

For their part, CHI Memorial’s heart specialists are emphasizing that their hospital’s surgeons perform more heart-related surgeries and procedures in the metro area than doctors from Erlanger and Parkridge combined.

“There are a number of studies that say if you are a high-volume producer at a high-volume center, you are going to have better patient outcomes,” CHI Memorial’s Warren said.

CHI Memorial’s specialty has been a procedure known as trans-catheter aortic valve replacement, or TAVR. As with Shears’ non-invasive surgery, CHI Memorial doctors make an incision in a patient’s leg and then insert a tube, or catheter, into the artery. An artificial valve attached to a deflated balloon is pushed through the catheter and then the balloon is expanded when the valve is in the correct location in the heart. The balloon is then deflated again and the tube withdrawn, leaving the valve in place.

CHI Memorial doctors have performed the procedure more than 150 times since it was first introduced in 2011, Oellerich said.

While Erlanger plans to bring different specialists together in its heart and lung institute, CHI Memorial says it is already doing something similar.

“We use a multidisciplinary, patient-focused team of physicians, nurses, social workers, physical therapists, and others who all meet with the patient and their family to determine if this is the right procedure,” Warren said.

Warren also touted a new comprehensive program to treat congestive heart failure that has a high success rate, with one of the 20 lowest readmission rates in the country.

Back at Erlanger, the new team seems ready for some competition. Heart surgeon Shears scoffed at CHI Memorial’s record of 150-plus TAVR operations, noting that he has performed the operation several hundred times.

“I’ve done more individually than the entire city has done — that’s why we are here, to bring that expertise to Chattanooga,” he said.

“Our focus has not been trying to beat out Erlanger and Parkridge, we have done that forever,” he said. “Our focus is on trying to be the best at patient care, quality, and satisfaction. That is what we like to do at CHI Memorial and at the Chattanooga Heart Institute.”

This article was written by Steve Johnson and originally published on timesfreepress.com.