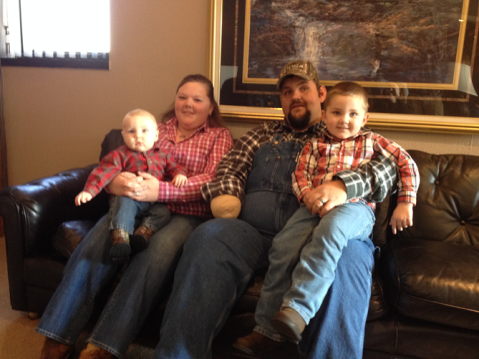 Buttoning a pair of blue jeans was never something Curtis Stephens dreamed he would rely on someone else for. These days he wears overalls, pants he can fasten by himself, while he waits for a prosthetic hand and the independence it will bring.

A life-long resident of Blairsville, Georgia, Curtis grew up making syrup for the community’s annual Sorghum Festival. The festival has been a part of Union County culture and a Stephens family tradition for more than four decades.

On September 21, Curtis was grinding cane for the festival when his hand became caught in morning glory vines. By the time he was able to free himself from the machine, his right hand was badly mangled. After a 45-minute helicopter flight to Erlanger, doctors determined Curtis’ hand would need to be amputated. It was Plastic Surgery Group’s Dr. Mark Brzezienski who performed surgery on Curtis that day, saving his arm from the wrist up.

“By the grace of God he was my doctor,” said Curtis, who attributes much of his recovery and upbeat spirit to his physician and staff’s care and support.

“I think the world of him. He has just been phenomenal. He knows the answers before I even ask the questions.”

Dr. Brzezienski has released Curtis to work four hours a day at his job at Napa Auto Parts, where before his accident he would pull 12-hour shifts before working side jobs to support his wife and two sons.

“When we got married, I said for better or worse. I meant that,” said Sarah Stephens. “I’ve tried to help him with anything I can help him with.”

Under the care of the team at the Hayes Hand Center, Curtis hopes to have a new hand by Christmas and begin therapy to learn how to use it.

“It sort of bothered my 3 year-old because I didn’t have a hand. I told him by the time Santa comes I’ll have a hand,” said Curtis. “He says I’m going to have one like Ironman.”

Curtis drives from Blairsville to Chattanooga for treatment at the Hayes Hand Center, a multi-specialty center staffed with physicians specially trained in the practice of hand surgery and hand therapists.

“You see veterans who come back who have lost limbs for us,” explained Curtis. “If they can do it for fighting for the country, I can do it just for the little bit I do at home. That’s the way I look at it.”

The Hayes Hand Center, located in Chattanooga, Tennessee, is dedicated to the treatment of disease and injuries of the hands. Staffed with physicians specially trained in the practice of hand surgery and certified hand therapists, The Hayes Hand Center offers immediate consultation and treatment to patients from Chattanooga and the surrounding areas of Southeast Tennessee, Western North Carolina, North Georgia and Northeast Alabama.
To learn more, or to contact our experienced hand surgeons for a hand surgery consultation, visit http://www.hayeshandcenter.com.