With profits back, Erlanger begins its biggest building expansion in nearly 20 years 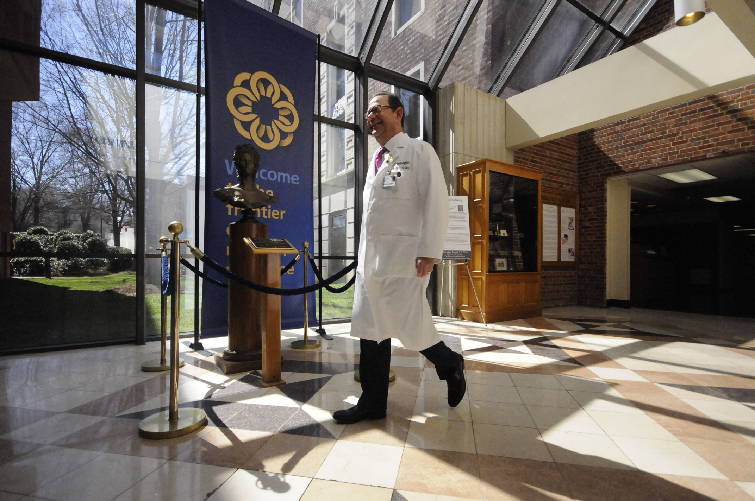 Two years ago, the fiscal health of Chattanooga’s biggest hospital sunk so low that it jeopardized future borrowing needed for new equipment and technology.

As seen in the Tuesday, February 3 edition of The Chattanooga Times Free Press and Edge magazine

Erlanger Health System, which lost nearly $32 million from 2011 to 2013, had only 65 days of cash on hand in fiscal 2013 — a level that put the hospital in technical default on its bonds. Unless changed, the hospital would be unable to issue more debt for at least two years.

“We were looking at some very tough alternatives,” recalls Donnie Hutcherson, a Chattanooga CPA and chairman of the 13-member board of trustees for the hospital authority that oversees Erlanger. “We got a new management team and I told Kevin Spiegel (hired as the new CEO), you can’t make changes fast enough.”

As a result, Erlanger is recording healthy profits again this year, only two years after it was still bleeding red ink. In the first half of the fiscal 2014-2015, Erlanger booked a $20 million profit and Spiegel said he expects continued net income through the balance of the current fiscal year.

With the support of Wall Street and the sale of $149.9 million in bonds in late 2014, Erlanger was able to not only shore up its finances but launch its biggest building projects in nearly two decades.

“The scale and speed of this turnaround has really been remarkable,” says Jack Studer, one of the principals in the Lamp Post Group who chairs Erlanger’s budget and finance committee. “This is like turning around the Titanic.”

The Erlanger changes, which combined to generate an annualized benefit of $47 million, were far from easy. Getting Erlanger designated as a hospital eligible for extra federal assistance in the Public Hospital Supplemental Payment Pool required months of negotiations with state and federal authorities. Although Erlanger provides the third biggest amount of uncompensated care of any hospital in Tennessee — and treats one of the biggest shares of TennCare patients of any hospital in the state — Erlanger did not previously receive the extra help from Uncle Sam that is targeted for public hospitals that provide the most uncompensated care for the poor.

Erlanger also reached out to physicians and promised better services and equipment if they used the hospital more. Last year, Erlanger boosted its market share for major hospital services in the Chattanooga area from 30.9 percent to 32.1 percent — the first such increase in market share in years. Hospital admissions, emergency room visits and surgeries all increased in fiscal 2014 and are up even more in fiscal 2015.

While boosting business, Erlanger also pared its expenses by cutting the average length of stay for hospital patients, saving $3.1 million a year, and shifting drug purchases to the federal 340(b) program for hospitals that provide the most care to indigent persons, saving another $6 million in annual expenses.

Erlanger’s staff was not immune from the cost cutting. The hospital outsourced its food and janitorial services and trimmed some of the health and retirement benefits for more than 3,000 of its employees to save a combined $7.2 million.

“Those were tough decisions that had to be made to save the hospital,” Hutcherson says.

But Spiegel says they were changes that were long overdue — and had already been made by others in the industry. Erlanger reduced its share of employee health benefits from nearly 90 percent of the costs to about 75 percent of the employee’s typical bill. Even then, Britt Tabor, Erlanger’s chief financial officer, says the hospital’s benefit plan is still “fairly rich” compared with many of its peers.

Although Erlanger is organized as a non-profit hospital, Tabor said the hospital needs to generate more revenues than expenses to continue to invest in new facilities and equipment.

“We’re excited to be able to generate a bottom line profit that we can reinvest in this hospital and this community,” Tabor told trustees after reporting one of the best fiscal quarters ever for Erlanger in the final three months of calendar 2014. “We cannot lose the quality edge. That is what attracts people to Erlanger.”

With the improved financial results, Erlanger is planning $96 million in capital projects, including the completion of the long-delayed expansion of Erlanger East Hospital. The capital improvements are the biggest at Erlanger since the hospital build the downtown Medical Mall in 1996 and 1997.

The turnaround won over Wall Street analysts last year. Bond insurers agreed to waive the 2-year moratorium on issuing new bonds following the technical default a few years ago. When Erlanger went to the market in November with one of its biggest bond issues ever — a $149.9 million refunding and capital improvement issue — the issue sold out in less than 45 minutes. Within a couple of hours, more than $650 million worth of orders were placed for the Erlanger issue. With the issue oversubscribed more than four fold, the hospital was able to trim the interest rate offered for the bonds, Tabor said.

“It was an extraordinary response, especially since another hospital just a few weeks earlier couldn’t sell all of its bonds,” Tabor says.

Analysts gave Erlanger favorable marks both for its actions and leadership in the turn around. Kay Sifferman, lead analyst in the public finance group for Moody’s Investors service Public Finance Group, praised Spiegel as “a new dynamic chief executive with operational improvement experience” to help sustain Erlanger’s turnaround. Fitch analyst Emily Wadwani noted that Erlanger “produced a solid” 3.3 percent operating margin in fiscal 2014 that is continuing into 2015 under Spiegel’s leadership.

“Since the new CEO was placed in mid-2013, significant financial and operational initiatives have yielded results,” she said in its assessment last year giving Erlanger a stable outlook and a BBB bond rating in November.

The refinancing reduced Erlanger’s annual debt service requirements from $19.1 million under the hospital’s old debt structure down to $15.1 million with the new bonds in place. The new debt is priced about a half percent lower, dropping down to 4.43 percent, and is extended out for another 15 years to help lower the annual debt service costs.

“The cash flow from the bond issue also allowed us to free up $71 million of additional capital,” Tabor says.

One of the biggest questions asked by analysts prior to the bond issue was whether Spiegel planned to stay at Erlanger. The 57-year-old CEO, who is building a home in Chattanooga and recently relocated his mother to the Scenic City, says he is staying.

Erlanger trustees gave Spiegel reason to stay last year, awarding the new CEO and other managers at Erlanger $1.7 million in bonuses for their performance in fiscal 2014. Spiegel received a $234,669 bonus to bring his compensation for the 2014 to $914,669, and Erlanger trustees have given him a 10 percent raise for the current fiscal year. Other Erlanger employees will get a non-budgeted 2 percent pay raise.

Spiegel’s compensation package — up nearly 67 percent from the base salary of his predecessor — was denounced by members of the Hamilton County legislative delegation who said it was too soon to award such a sizable bonus to Spiegel and other managers, especially since a good share of the extra money for Erlanger came from additional taxpayer support for the hospital and came only after Erlanger trimmed benefits for other employees. Tennessee state Sen. Todd Gardenhire, R-Chattanooga, called the bonus paid Spiegel “a sneaky, greedy, uncalled-for act by the administration and the trustees of Erlanger.”

But Erlanger trustees insist they are simply paying market rates and rewarding performance. Previous CEOs at Erlanger made less, in part, because they didn’t meet performance targets. Hutcherson said the board is trying to keep pace with other hospital CEO compensation and ensure they keep an executive that Wall Street clearly likes as they pursue additional fundraising for a children’s hospital in the future.

“In the past, we didn’t make our budget, but now we’re beating out budget,” Studer says.

Spiegel insists it is important for the board to maintain incentive pay for its top managers. During his first two years in Chattanooga, Spiegel has recruited or replaced about half of the hospital’s executive staff.

“Executives are recruited with the understanding that if they do perform, they will be rewarded,” the Erlanger CEO says. “We benchmark salaries based on fair market value to make sure what we pay is fair and adequate to attract the best talent to our hospital. In order to recruit and maintain top talent, you are going to have to have an incentive-based compensation plan because every other hospital is doing it.”

Spiegel said he expects his managers to exceed all their targets again this year. Asked if he would consider giving back any part of his own bonus because of the controversy sparked by the payment, Spiegel said he would not “because I think the executives earned them.”

But the Erlanger CEO said he does plan to donate $50,000 of his own money — and he expects other hospital managers to contribute as well — to Erlanger’s next major building project: a new children’s hospital to upgrade the aging T.C. Thompson Children’s Hospital.

“We see a bright future for Erlanger and we as managers, physicians and others in the Erlanger community want to invest in that future,” Spiegel says.

This article appears in the February issue of Edge magazine, which may be viewed online at www.meetsforbusiness.com